One of my favourite parts of any implementation is the branding. Working with the customer’s teams to shape the appearance of the application is often very rewarding. The colour schemes are often pre-set (as there’ll be a corporate style guide setting out the colour palette with strict rules about the situations in which each should be used) however companies can be a bit more creative when it comes to the background image.

If you’re going for a pattern or something abstract, it’s pretty simple. Here’s the latest Redwood branding from the Oracle demos (which actually looks really nice):

We don’t want any gaps showing around the edges if user’s computer screen resolutions are different though (on home or work devices). How do we deal with that? Just make sure the image uploaded is really big. Here’s Oracle’s actual background image with the red box showing what’s visible on my screen:

It’s pretty safe to assume not many will have a screen resolution so large that gaps are showing around the edge of this background image.

Photos are great choices for a background and give a really impressive result. Ideally you want it to sit nicely along the bottom of the screen, but this is tricky to achieve as different screen resolutions invariably mean:

Say this striking building in South Korea was your company HQ and you wanted it as your background.

Depending on the resolution on user’s work and home computers, they might well see one or other of these:

The simple solution is to use a tiny piece of styling code in a simple personalisation to anchor the bottom of the image to the bottom of the user’s viewport – that is, their visible area of the screen. I’m sure there are several ways of doing this, however I favour the CSS background position property.

The result is a background image that sits correctly against the lower edge of the screen:

This entry was posted in Customers, UI.

Over the last 6 weeks the project that I’ve been working on for the last year – University of Birmingham – has gone live with their New Core programme.

New Core comprises a number of moving parts, but front-and-centre of it all is Oracle HCM Cloud and Oracle ERP Cloud. The reason I say ‘properly live’ is this isn’t one of those posts where someone says “we’re live” but it’s really only a part of the employee population or a subset of the modules … this is a big bang deployment of both pillars across the entire University.

The important points for me were:

The full announcement can be found here.

This entry was posted in Customers.

A week ago I attended Oracle OpenWorld London. I could only get one day away from client site and the event spanned two days, however the HR content was mostly on the Thursday so that’s the day I went to. Here’s what I learnt:

The first session of the day was the team from Macdonald Hotels. They’re a couple of phases into their Fusion roll-out already and Kevin, Lauren, Emma and Jason spoke talked through different aspects of their Core HR, Payroll and Taleo implementation.

It’s a good story – Kevin had a smart apartment block analogy for using Fusion (I won’t spoil it here, and I suspect this won’t be the last time Macdonald Hotels speak at Oracle events so make sure you catch them).

Lauren spoke about recruitment and said that they can go from raising a requisition, through email approvals and onto the opening being published on job boards in 10 minutes. Very impressive.

Emma gave some detail of their payroll – 3,500 payees across 13 payrolls, some of which have some tricky national minimum wage offset and live-in staff fast formulae. Jason covered reporting and said that they really only use BIP if they need to, as OTBI is much more accessible so the whole team can use it and has built-in security.

They’ve gone from paper-based processes and no self-service so it’s quite a jump. The team are properly passionate about HR and have a strong focus on the end-user experience so it’d be great to see more of their implementation.

Mark was the Oracle keynote speaker and having seen him present in person before I was looking forward to seeing him talk again. He pulled out at the last minute – I guess he was ill – which was unfortunate.

He did speak remotely, however I took the opportunity to catch up with some customers who were present instead.

As you’d expect for a company the size of AXA, their roll-out has a significantly longer time-scale. They’ve been working on it for a while though so they’ve made good progress. They’re working with a blend of partners (about 5, I think).

My biggest takeaway from this session was their Quarterly Update approach. They alternate between the mandatory changes during the Oracle enforced timelines and optional changes in the gaps. They do not want to fall too far behind the curve or build up a big backlog of changes to apply so are taking optional functionality in between each of the Quarterlies. Their view is that “There’s no happy ending, it’s a neverending story.”

They also had a nice model for displaying the roadmap items to identify quick wins and high-value changes.

I was looking forward to hearing Chris Leone as he’s a charismatic speaker who is always positive about new functionality. He’s also high enough in the Oracle hierarchy to be able to freely discuss the upcoming changes. 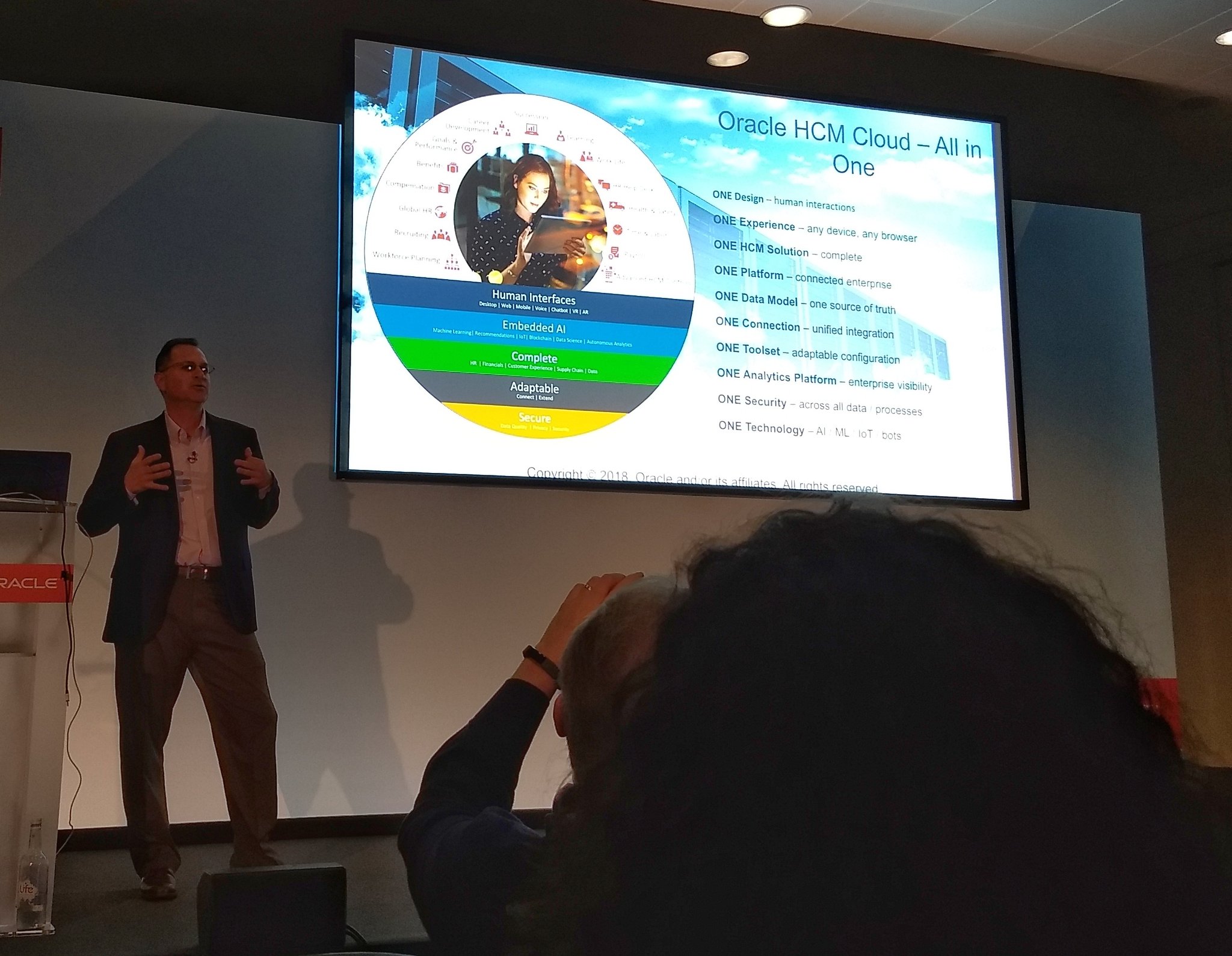 Chris walked us through the functionality that we’ll be looking to get our hands on and then said:

“Normally, vendors show roadmap slides showing 6 to 12 months out. This is all coming in the next 3 months.”

What a great message.

Some of the functionality that he discussed was:

The venue itself seemed really busy – I’ve seen estimates of 8-10,000 attendees and I guess the high turnout took Oracle by surprise as I heard that the registration queues on Wednesday were lengthy.

The demo grounds were busy with lots of exhibitors and the balance of existing customer/potential customer/vendor/partner was healthy. The lunchtime sandwiches were a bit ropey though – I might bring my own next time!

This entry was posted in Customers, OOW.

We had around 50 clients present, plus attendees from Oracle, some from Cedar, and – for the first time – also our new Version 1 colleagues present too.

A venue itself was fantastic:

We started with ‘early bird’ streams where we split the Cloud and PeopleSoft people into different areas and provided updates on their respective products from what we’d gleaned at Oracle OpenWorld.

Then we adjourned for dinner with a Cedar/Version1 update and after dinner speaker: 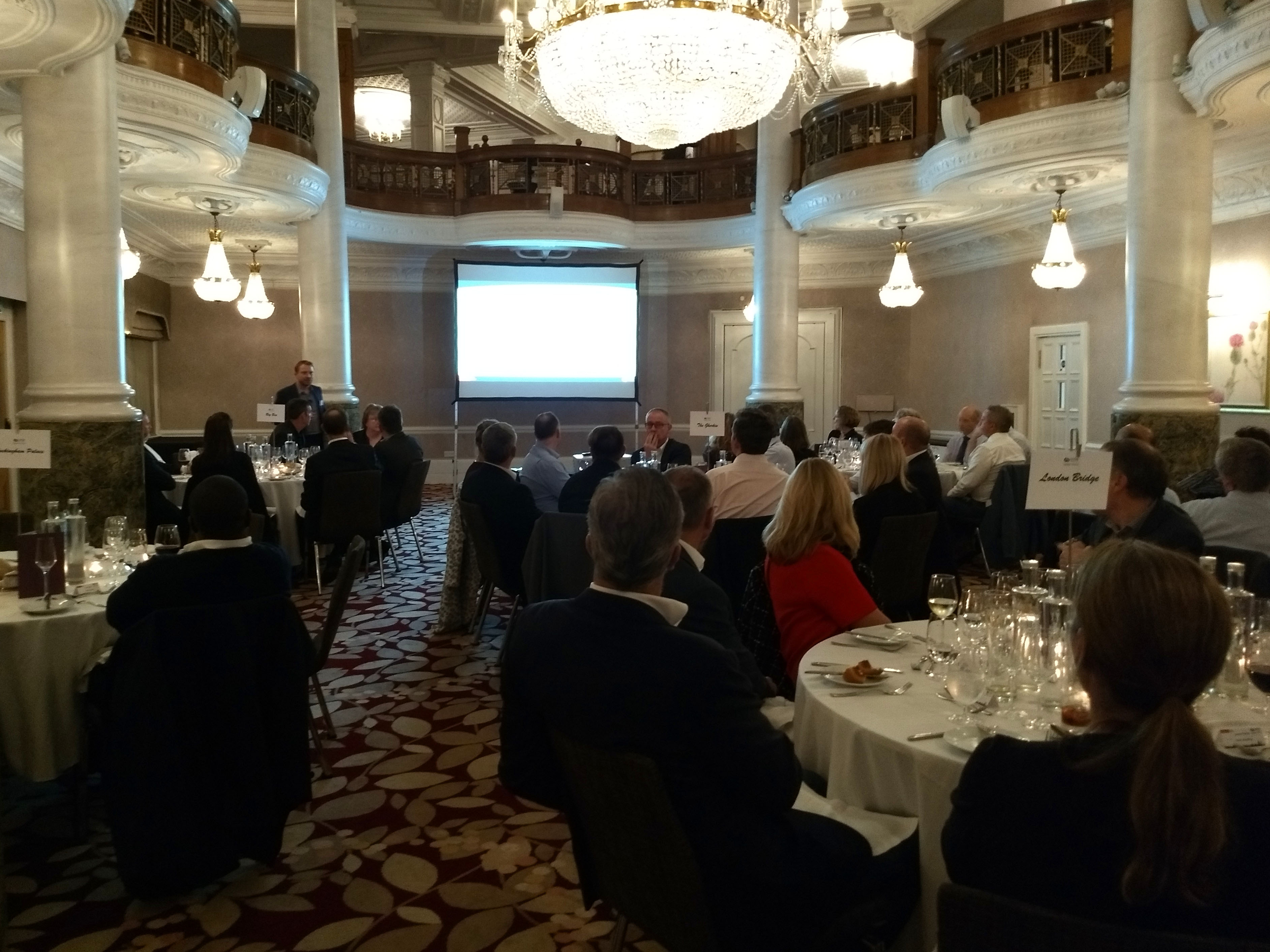 If you would like an invite for the next one, please get in touch.

This entry was posted in Customers.

Adoption of the ‘Big 3’ SaaS Suites

Bill Kutik’s regular handicapping of the ‘big 3’ SaaS vendors is an interesting read. The most recent entry can be found here.

Bill goes through each of SAP/SuccessFactors, Oracle and Workday in turn and gives an update on customer numbers however, I think it’s easier to view in a graph:

Here we can see that SuccessFactors has 1,250 HCM customers (on Employee Central) and 1,900 on their Financials solution (S/4 HANA ERP).

Oracle is slightly ahead with HCM Cloud Core HR customer numbers, and far ahead with ERP Cloud.

Workday is another 50 customers ahead with their HCM offering, but at a fraction of the customer count on the Financials side.

Also worth noting is that Oracle’s figures are from May 2016, SAP’s from Jun 16 and Workday’s from Sept 16, so this direct comparison is probably unfair to SAP and particularly Oracle as they are likely to have gained new customers in the interim.

This entry was posted in Competitors, Customers.