Mary Meeker has delivered her annual Internet Trends report and – as usual – there’s a lot to consider. Others have picked it over for general points of interest so I won’t repeat that, so instead I’ll focus on possible ramifications for Oracle’s Cloud Apps.

There was no growth (in 2017, compared to 2016) on new mobile phone shipments. Have we reached smart-phone saturation point? Also of note is that it’s now a completely two-horse race with no alternative to Android (~85% market share) and iOS (~15%). Growth in internet users sits at about 7%, so this growth is on platforms other than mobile. Internet usage now sits at 3.6 billion people, ~50% of the World’s population.

Although there’s no increase in mobile phone sales, those that are using the internet on their smartphones are spending more time using them. Of the average 5.9 hours/day, the majority of this is on a mobile device (phones & tablets).

The new HCM Cloud newsfeed UI – which is responsive on mobile devices – cannot come soon enough in this respect.

Chat use is Rocketing

The leader – Whatsapp – is now at an incredible 1.5 billion monthly active users and is still climbing.

Any concerns that we may have about the adoption of Chatbots within Oracle Cloud should be lessened as customers will surely be comfortable using multiple chat interfaces by the time they are released.

Google’s reported accuracy for its Machine Learning software has passed the 95% level that is used as the benchmark for human accuracy. The Amazon Echo install-base is now up to 1/4 of US households and there are now 30,000 “skills” in its repository of commands.

All this means that voice is increasingly important. I’ve heard of Oracle Voice – and seen a video of a salesperson adding an entry into Oracle Cloud in the back-seat of a taxi via voice – but haven’t heard of any other delivered offerings in this area. I’ve also seen the Steve Miranda demo during the Oracle Soar announcement (if you missed the demo, it’s 2 minutes and can be seen here).

Mary also spoke about personalisation of the user experience of a service by using data – both from the individual and collective data. 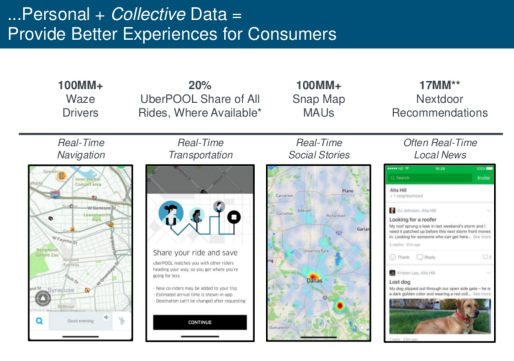 She also mentioned a paradox related to this personalisation. Companies obviously need to store more information about each user in order to effectively personalise the service to the individual’s needs, however there is increasing caution about which companies hold personal data.

Clearly, the HCM Cloud parallel is the imminent newsfeed UI which adapts its content to the user and the intelligent defaulting of fields based on machine learning algorithms.

Unsurprisingly given the Cambridge Analytica / Facebook debacle Mary highlights rising concerns about what companies are doing with our data. Many countries have updated data privacy laws (including the EU’s GDPR). What is more of a shock is that the data privacy laws in the US haven’t changed since 1974.

Oracle’s investment over the last couple of years in building out its global data centre coverage will definitely help allay concerns where customers have requirements to deploy in countries where the regulations are more rigorous.

It’s becoming increasingly obvious that relying on the same security that you did 2, 3 or 5 years ago is just inviting trouble. There is 12x the number of observed malware attacks than there was 2 years ago. Mary says “Adversaries are taking malware to unprecedented level of sophistication & impact … and for some the prize isn’t ransom, but obliteration of systems & data.”

That Oracle have increased the focus on security precautions and detecting malware with their autonomous threat detection and machine learning algorithms is definitely a good thing here.

Mary also trumpeted the massive growth in the use of video for consumption of educational content.

This ties in very nicely with Oracle Learning Cloud, which enables the delivery of bite-sized videos, either stand-alone or as part of a series, to aide continuous learning within a company.

For those with time to kill, the full (294 slide) deck can be seen here:

This entry was posted in Uncategorized.

If you want to discuss any aspect of this blog, I can be found on Twitter, Email, or LinkedIn.